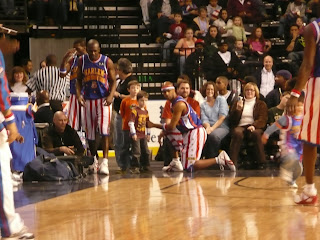 For Christmas this year, Matt decided he wanted to get the kids a gift where they got to do something together. For Maddy, he got tickets to the childrens theatre. For Ryan and Cade, he got Harlem Globetrotter tickets. He asked if I would mind ordering all the tickets. When I ordered the Globetrotter tickets, I got floor tickets and I am so glad I did.

I showed Ryan and Cade some Globetrotter footage I found online so they would have a clue what they were in for. Nothing I found did the team justice. 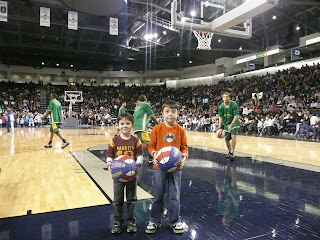 When Matt and the boys got to the arena, they found their seats right by one of the hoops. Not long after they sat down, someone approached them and asked if the boys could participate in the game. Matt signed a waiver and the boys got to go to Globetrotter University. Both boys were asked to come out onto the floor and dance with a group of kids and the mascot, Globie. Cade was more than willing to show off his mad dancing skills but Ryan opted not to. 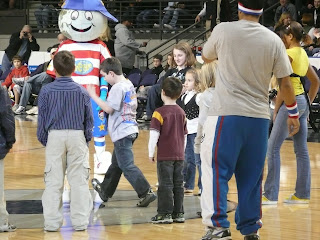 Here Cade is waiting his turn to go at it. Matt tried to get a picture of him dancing but couldn't get a good shot. Hopefully the team photographers got one. Apparently Cade totally let loose and put everyone to shame incorporating his karate moves into his dancing. I wish I had video of it!

In the third quarter, the boys were asked to go out and try to steal the ball from one of the players, Airport. Airport is 6'8" so he cut his advantage and got on his knees so the kiddos had a better chance. 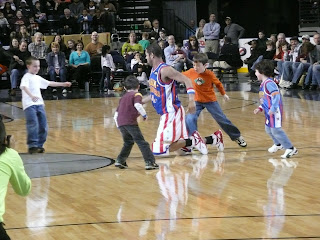 Ryan didn't want to go out so Matt told him if he was able to steal the ball from the Globetrotter then he would pay him $10.00. It got him onto the floor but I don't think I saw a single picture of him smiling. I think he was too focused on earning the money (which he didn't get). Cade is smiling in every picture you can see his face but he was never really close enough to get the ball.
All three boys had a great time. They came home talking about how Globie ate someone cheering for the other team (Washington Generals) and how the Generals coach cheated (put a lid on the Globetrotters basket, rigged the scoreboard to give the Generals more points). Airport made Cade cry though. After the boys went out and tried to steal the ball from him, he came over and signed their basketballs. Cade was quite upset that someone would write on his new ball. He asked Matt "Can you lick this off with your tongue?" He woke up this morning and told us he was okay with it now but he will like it more when he is 6. I asked him why. When the player signed his name, he also put his number...#6. Now we are counting down the days when Cade will be fine with his autograph.
When we get the pictures the team photographers took, I'll post them too.

Super cool outing! Sounded like fun . . . for most of it anyway ;) Great photos too. Funny what we end up bribing our kids with - hehe