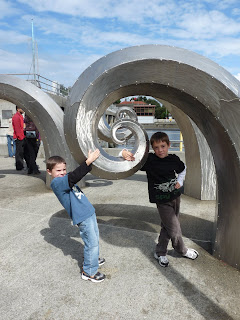 Monday Matt and I took the boys to the Ballard Locks. The Locks are where the sea water from the Puget Sound meets the fresh water from the lakes (Lake Washington and Lake Union). The water level of the lakes is 20-22 feet higher than sea level. What does this mean? It means when boats want to go from the sea water to the higher lakes or the other way round, they have to go thru the locks. The boats go thru one set of gates and 'park' behind another set. Once there are enough boats in between the gates, the back gates are closed. They raise or lower the water level between the gates and then open the front gates. 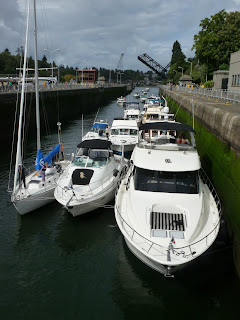 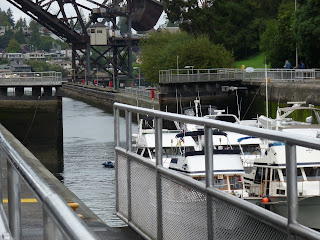 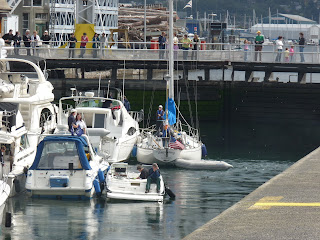 Besides the boats, we were all entertained by the fish. The salmon were going crazy! I don't think I have ever seen fish jump out of the water like they were then. 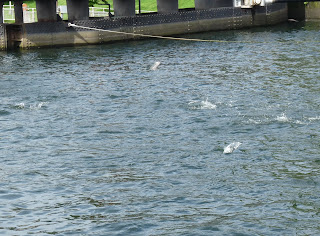 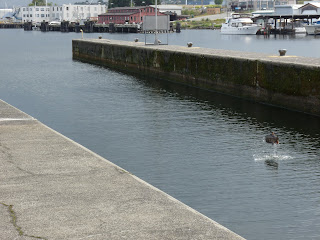 In the second to last picture you can see the splash the fish have made from jumping and I think you can see one fish in the air. In the last picture (bottom righthand corner) you can see the fish flying.
I was really hoping to see some of the boats from "Deadliest Catch". No luck with that but we did see the bar they all hang out at.
Posted by jen at 5:10 PM

The bar is very important. Nice picture of the fish in motion. I'm glad to see education is part of the LaTurner curriculum. Good job.