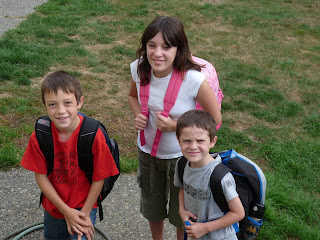 We reached a milestone today in our family. Today was the first day in almost 11 years that I haven't had a child at home with me for at least part of the day. Today was the first day of school.
What did I do on my first 'free' day you ask? Why, I spent it at the school of course! Katie and I were in charge of making the teachers back to school snack bags. I made the bags and Katie decorated the front of composition notebooks...very cute! I think the teachers really appreciated them.
While I was busy doing the PTA stuff, Matt was at home getting kids ready...packing lunches, writing checks for supplies, making sure teeth were brushed and everyone had on clean clothes. Maddy and Ryan had already told Matt it was fine if he walked them to school. Cade would have nothing to do with that. "Not on the first day, Dad!" Matt took two pictures of the 3 kids together outside and they were off. I saw Matt at the school wondering around and he had already lost everyone. We found Maddy and Ryan exactly where they should be. We decided to divide and conquer to try to find Cade. I ended up chatting with another mom when I hear, "Hey, mom, what's up?" We got Cade to where he should be and all was well. 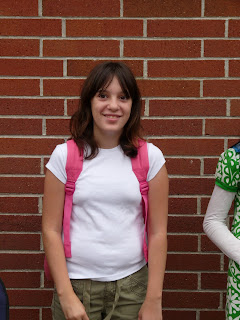 Maddy was pretty excited for school this year. This will be her first year having a man for a teacher. She also gets to do DARE and the High Tea (which she is was the first one to finish this year). As fifth graders they also get to do a rotation so they get to have all the 5th grade teachers. 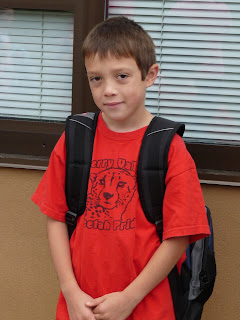 This was Ryan's first day as a 3rd grader. He was also excited but also a little nervous. I don't think he had any idea what to expect his teacher to be like. He came home saying she was nice so that puts my mind at easy some. 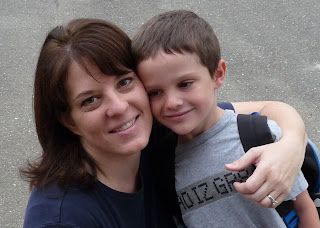 Mr Independent, I mean Cade came home a little disappointed. He couldn't believe they didn't have 2 lunches today. I told him there is only supposed to be one. He says "Well there should be two because I am STARVING!" Apparently the long day is going to be an adjustment for his eating schedule. He did mention he made some new friends. There is one girl in his class that bugs him though because she keeps telling everyone to SHHHH!
Besides doing the PTA stuff I got to help in Ryan's class and in the office. I got home thirty minutes before the kids did just so Cade wouldn't think I was picking him up. I might actually take the day off tomorrow. Maybe.
Posted by jen at 4:45 PM

That's a cute picture of you and Cade.

Your daughter is you in miniature. What a cute family you have!