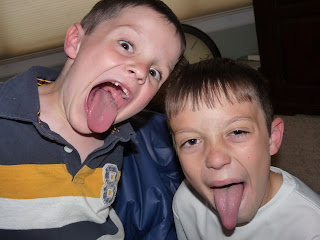 Sometimes my kids make me want to pull my hair out. They can drive me absolutely crazy. Tonight was not one of those times. Cade has been so into Ryan lately. He wants to snuggle with him. He wants to read with him. He wants to play with him, draw him pictures, make him something.
Tonight, Cade decided to he wanted to wrestle me. Ryan jumped in and 'took him down'. With a little effort on Cade's part (and a lot of Ryan "letting" him), Cade pinned Ryan. Any attention Ryan will give to Cade, Cade will totally eat up. I love seeing them get along so well. They wrestled for about 15 minutes before I made them take some pictures together. 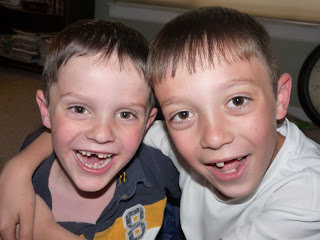 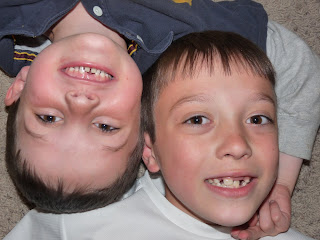 I love that top picture of the boys...it is so cute! Cade just looks like he's having a ball! My kids had one of those days yesterday too. They didn't argue and they played for hours together.

I need some boys at my house. Send those cuties over for a visit anytime.