The Manson Apple Blossom Festival is always held the second Saturday of May each year and every year we head over for the festivities.
Before the parade began on Saturday morning, all 5 of us ran in the Pig Jig. We did it last year too. Last year, Matt and Ryan ran the 5K. My sister, Sara, went with Cade for the 2K and Maddy and I were going to do the 2K together. Just before the race starts, Maddy turns to me and says, "I am going to kick your butt!" She gets an early lead but it is not too far into the race that I realize that I don't see Maddy. Ends up she didn't see the turn for the 2K runners and ended up doing the 5K race instead! Of course I had to wait for her at the end to let her know I had indeed beat her to the finish line. This year she ran with Matt and Ryan so he could point out the turn point to her. Sara missed her crossing the finish line this year so had Maddy re-enact finishing the race. She is so not the actress. 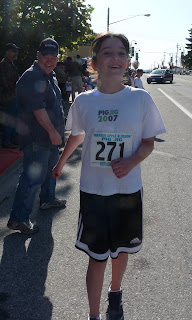 Cade did great. He ran and talked the whole race. 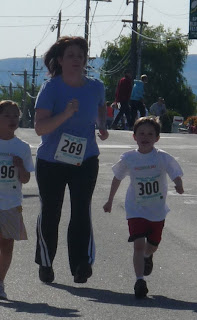 Ryan ran with Matt and did super. He beat his last years time. 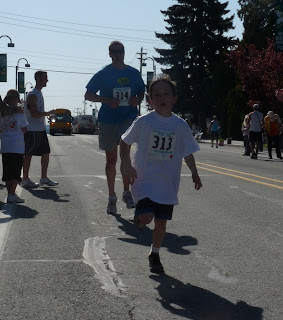 This year marked the 89th year of the festival. It was especially neat this year because my youngest cousin, and my grandparents youngest grandchild, was a princess. Whitni is grandchild number 37. 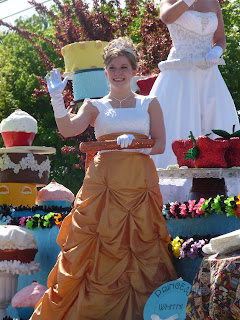 Dale, Whitni's dad, was named Citizen of the Year so he got to ride in the parade as well. He is the one in the Hawaiian print shirt. 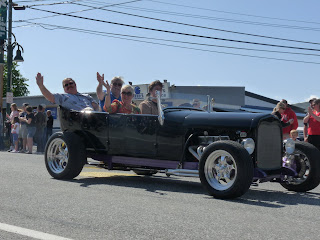 Matt, our brother-in-law Doug and my cousin Marissa all drove fancy cars in the parade. Maddy and her cousin, Kelsy, rode with Marissa. Ryan and his cousin, Aden, rode with Doug. Cade opted out so he could grab candy that was being thrown along the parade route.
Looking forward to next year!
Posted by jen at 8:19 PM