Sorry for the delay in posting. Again, life is a bit hectic.

As you know, Matt coached both Ryan and Cade's basketball teams this winter. Here is an article one of the parents wrote for the local newspaper. 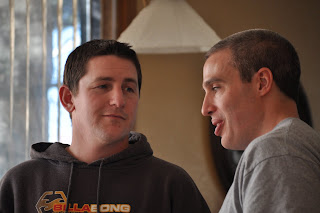 My son, Mason, started playing basketball this year. I attended the obligatory meeting at the beginning of the year and was pleased to see that I knew his new coaches, Matt LaTurner and Scotty Edwards. I knew he would be in good hands, but I didn’t realize how much more than just basketball would be taught.
Matt and Scotty have been coaching together for the last two years and this year they took on two teams. The teams are sponsored by the YMCA and included about 30 local boys. Somewhere in the middle of the season Matt told the parents that we would be having a party at the end of the year for the boys on the team but the coaches did not want a coach’s gift. For those of you who are veterans of the child sport phenomenon, the coach’s gift is given to each coach as a way to make up for the endless hours of time and effort that the coach puts in while you run to the store and celebrate that hour of peace and sweet freedom. When all of us looked around with that deer in the headlights look of “what do we do now?” Matt suggested that we raise money and donate it to a charity.
The discussion then changed from what do we get the coaches to who should we donate to? The answers were obvious. On each team there was a player who had a family member personally touched by a major charity. The younger team chose the Make-A-Wish Foundation and the older team chose the Muscular Dystrophy Association. This choice was easy for the boys because they actually knew someone who had been affected by the kindness of others. Matt and Scotty also felt that it was important for the boys on the team to realize how fortunate they were to be able to play basketball and to participate with their teammates.
Payton Burpee, one of the boys on the younger team, was a recipient of a wish from the Make-A-Wish Foundation. When he was 3 months old he was diagnosed with an extremely rare heart condition. His wish was to swim with dolphins. He was able to do just that at Sea World and he also got to spend his 4th birthday at Disneyland. His older brother Davis has the same rare heart condition and was able to have his wish of meeting the Seahawks and being on the sideline during a game. This charity was a natural fit. When asked what he thought of the coaches giving up their gifts Peyton replied "I think it is really nice that Coach Matt gave up his gift. I had so much fun on my wish; Donald Duck made special time with me! And I got to feed and pet Dolly (a dolphin) and see her new baby. Coach Matt is letting another boy have a wish come true. I think it is very nice of him. I really love Coach Matt."
The older team chose the Muscular Dystrophy Association as their charity because they also had a personal connection to the charity. My nephew and Mason’s cousin Brennan has muscular dystrophy. By all accounts he is a typical 9 year old but you quickly see that he can not run and play as well as many kids his age. His legs and arms are starting to be significantly affected by his condition. They expect him to be confined to a wheel chair within a relatively short period of time and his life expectancy is about 18 years. Mason was glad that the coaches decided to donate to charity saying: “I think it was nice because they could find a cure to help Brennan so he doesn’t die.”
In fact the boys all seemed to think this was a fine idea. Rick, one of the boys on the team, said “It’s a good idea to help people who cannot play. Helping is more important than having.” When asked what he would remember most about the season Rick also said “the coaches, how special they are and donating the money to people who cannot play.”
The Boys really did their part in getting donations. All told they gathered over $600 for the two charities. Matt and Scotty’s decision has already started to change things in our community. I have received an email from a coach who was inspired by this and will be doing this for his team next year.
Jen LaTurner, Matt’s wife, had a son on each of the two teams. She said “The hope is for each player to realize not just how much fun it is to be able to participate in an activity like this but that there are others who don't have the chance at all. I think both boys are starting to realize that we either have things or get to do things that a lot of others don't. They also realize that giving is better.”
Matt and Scotty are the kind of roll models we all want for our kids. They teach the fundamentals, they work with each kid individually, they make 15 screaming 8 and 9 year olds into a team and on top of it all they throw in a life lesson on gratitude and giving. And, when it comes to coach’s gifts can you really ask for a better gift then that?
Posted by jen at 7:34 AM

Very cool article. Matt's a great guy. How cool to be spreading around and teaching the young kids.

This is wonderful! I heard about this while it was in the paper, but wasn't able to get a copy. Glad you posted it! (And glad I found your blog! It's great!)