Ryan and Cade both had their first basketball games today. Here is Cade showing off his shooting skills. He scored 8 points! He did really well. He probably needs to work on passing a bit. Once he made one basket, he realized it was easier to score if he just took the ball all the way and did it himself. I'm guessing his teammates might want a chance sometime. It was fun to watch him play defense when his team had the ball. I'm sure it was a tactic used to throw off his opponent. 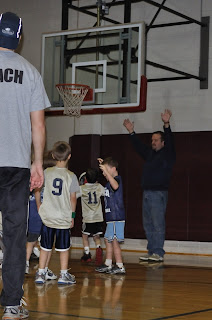 Ryan just hung around while Cade warmed up. 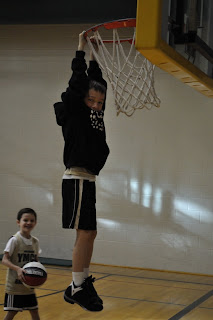 Ryan's game was exciting but not for the same reasons as Cade's. The other team was able to get a lot more practice time in than our team and it was obvious. I didn't realize 2nd and 3rd graders would be running plays. Not just 1. They had at least 4. Our boys really did try and the second half showed a lot of improvement.
This last picture is of Ryan and the boy he defended. I should have known the kid was trouble when he came out with a headband and matching wristbands. When Ryan is defending someone, he tends to have his arms out and is touching the opposing player. Apparently this kid didn't appreciate it and starting hitting Ryan. Both boys were pulled out...Ryan crying thinking he was in trouble and from getting hit and the other kid screaming about not being able to do anything out there. The YMCA staff guy came over and talked to Ryan and let him know he hadn't done anything wrong. He said the other kid was frustrated that Ryan was defending him so well but that he might want to keep his arms down just a little. He really was good with Ryan. Ryan got back in the game in the second half and did a good job. 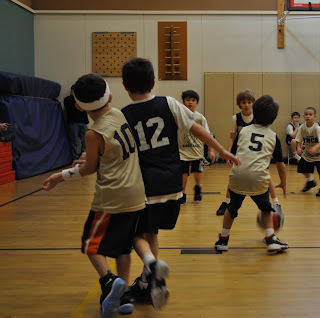 Oooh, the good old days of AAU basketball. Enjoy them, they are the building bones of even more games.