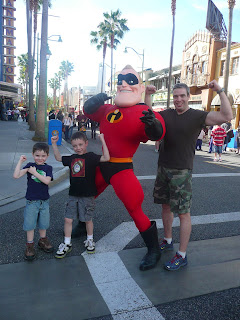 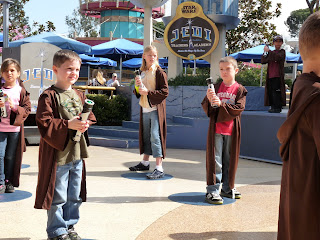 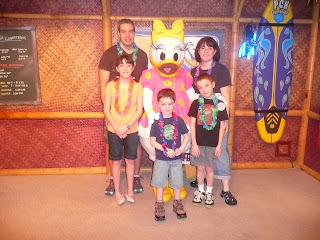 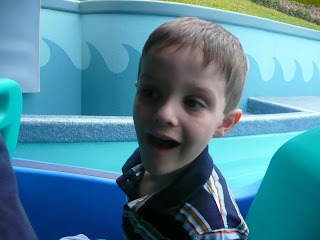 Last Monday morning was almost like Christmas here. We needed to get the kids up at 5:30am so we could catch a flight to Orange County. It is funny how easy or difficult it can be to get a child out of bed depending on the reason. We had no problems getting our three kiddos dressed and out the door.
We arrived in California at about noon and were able to check in at the Paradise Pier a bit early. When we were checking in, they asked us if we were celebrating anything. I told the man it was Ryan's birthday. It was really in January but instead of going to the Great Wolf Lodge (waterpark), we did this trip instead. They gave Ryan a balloon bouquet, a badge to wear that said "happy birthday" and a card to put any pictures on that they take at Disneyland. You still have to pay for the pictures.
We went to the park and quickly learned how much Maddy, Ryan and Cade are just like their mom. I am not a rollercoaster person. We had no problems getting them to go on 'It's a Small World' or 'Mr Toad's Wild Ride' or 'Autopia'. They loved those. We have about 20 drivers licenses from 'Autopia' to prove it.
We went back to the hotel after goofing off at the park and in our room was a plate of Mickey Mouse shaped rice crispy treats for us to share on Ryan's 'birthday.' Talk about the best birthday ever.
The trip was a success for sure. We did have a few things we would have hoped had gone differently. The weather was beautiful the whole time except for one day when it poured most of the time. Enough that we had to buy ponchos to stay mostly dry. It also would have been nice if after we bought those ponchos, we all would have worn them when we went on the 'Grizzly Rapids' raft ride. I was the only one either thinking or the only one quick enough to put mine on. Maddy and Ryan got soaked. They liked the ride but were very wet and cold afterwards. One person (I won't name names because she will probably get mad at me for doing so) informed us that until we bought them new shirts or took us back to the hotel to change, she wasn't going on anymore rides. We bought a towel and basically said "deal with it." After awhile both the kids and someone's attitude warmed up.
Matt would have loved some company on some of the more wild rides like Space Mountain or California Screamin but no matter how much he pushed or what he promised, he had no takers. Cade saw the loop on the rollercoaster and didn't want Matt to go on it.
In the end, Cade ended up being the bravest (he at least rode 1 rollercoaster), Ryan said he would ride Space Mountain and got into line with Matt before changing his mind ("at least I made it that far so I was the bravest") and Maddy didn't really care about being brave.
We also went to a couple Character Breakfasts and saw some Disney characters...Chip and Dale, Lilo, Stitch, Goofy, Pluto, Daisy, Minnie. I was kind of surprised that we didn't see more characters roaming the park.
We decided to take one day off from Disneyland and go to either Universal Studios or Legoland. We had friends give us some passes into both. Both Ryan and Cade like Legos and since all three weren't big riders, we opted for Legoland or as Matt and I now refer to it as Lame-o-land. The kids loved it but now we wished we had gone to Universal. I was also playing a game with Cade, dropped the camera and broke it.
After Legoland we took the kids by Oceanside to see the ocean. As we were walking down the big pier, we saw 3 big pelicans. Matt stood by one and the bird took a step away. Matt took another step closer. Pelicans are faster than you would think. The bird swung its beak around and bit Matt on the leg! I would say the boy deserved it.
The last day we hurried over to the park so we could fit a few last minute things in. We had tried to go to the Jedi Training Academy earlier but the show was canceled due to rain. This time the weather was great and Ryan and Cade were both selected to participate in the training program. About 30 kids were chosen to 'train'. Each was given a training light saber and a robe to use during the program. The boys loved it. Ryan ended up fighting Darth Mal and Cade fought Darth Vader.
Overall, the trip was a blast. The kids played all day and swam every night. They got up early each morning and crashed every night. This was Cade's first time on a plane and to Disneyland. One of my favorite pictures from the trip is of Cade as we are going into 'It's a Small World.' Pure joy and amazement on his face.
As we landed back in Seattle, Cade leans over and says, "In Disneyland they say all your dreams will come true. Well, I wished for no airports and no cats and they are still here!" A truely Cade statement for sure!
By the way, it's snowing here in Duvall!
Posted by jen at 5:43 PM

What fun! I can't believe, though, that you don't have one daredevil roller coaster rider. I'm the only one in my family that hates them. Matt should go with my clan next time and I'll go with you guys.