It is all in who you know 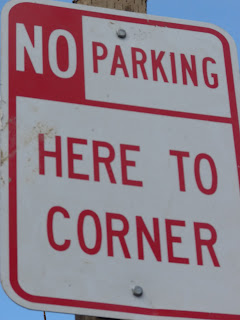 We live right across from the elementary school. I love being so close because I don't have to worry about my kids getting from here to the school with any problems. They walk out the door to the waiting crossguard and there they are.
Living so close does have some disadvantages. One problem that we are reminded of again and again is parking during sport seasons. People park on the main street just off ours to take kids to practice. They park so close to the intersection that when we try to pull out of our street, we can't see cars coming down the hill.
I got frustrated enough with it yesterday that I called the city to see if there was something that could be done. The city told me I would have to call either the police station or the fire department. I called the police and they told me to call the city. When she found out they referred me to them, she offered to talk to them herself. She calls back a little later and tells me who exactly I needed to talk to at Public Works Department of the city. I finally got ahold of the guy who then tells me I needed to call the police. Umm, I don't think so. He finally said he would pass it along. Right. The more I thought about it, the more I felt like he totally blew me off. I called back and got his name.
I then thought I would use my best resource...my sisters group. It's a group of women in our town who ask questions, offer advice, etc. Let me tell you, I should have gone there first. One gal lives next door to one of the Public Works supervisors and one emailed a gal on the city council. I get a call this morning from the supervisor who says he is on it. I just got a call from him again. They have our no parking sign up already. Take about knowing the right people! Thanks, sisters, I couldn't not have done this (this fast) without you!
Posted by jen at 4:00 PM

I was hoping no one would catch that!