A Lot of Catching Up

So again my lack of posting is due to the fact that so much has kept us busy.

Sports...In mid November, Maddy and Ryan finished soccer. Finally. This week...Ryan and Cade have both started basketball. This is Ryan's 2nd year and Cade's 1st. Both are very excited and both have Matt as their coach. It works out really well because both practices are on Wednesday one right after the other.

School...All 3 kids are going great. We had parent/teacher conferences before Thanksgiving break. Ryan has been involved in ASB and decided to run for Activity Person. There were already 3 people running so he decided to go for Secretary instead. Two reasons for that: 1. there was no one to run against him and 2. he thought it was security not secretary. He won. He is most excited because he gets to tell people to quit talking when he thinks they have gone on long enough.

Thanksgiving...We went over to Granny Janny and Papa Butch's for Thanksgiving. It was the first time in awhile we had all been together in Manson. The kiddos loved seeing their cousins. Matt, Maddy and I went to see 'New Moon' with Sara, Sara, Kelsy and Aleasha. Matt and the boys played in the Turkey Bowl. 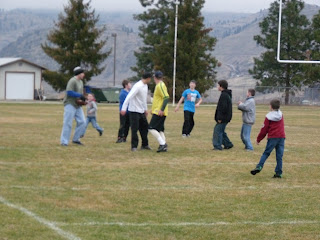 Work...I have been busy subbing. I got a 10 day sub job working in the special ed room at the elementary. In the mornings I am assigned to a little girl (www.jaydaswebsite.org) and after she goes home I am kind of a floater. It has gone really well and the days go by fast. Matt has been crazy busy too. He has been doing his normal job but they needed someone to work a short term gig as well. On top of that he got called to jury duty and was selected. They are expecting the case to take 2 1/2 weeks. He gets to go into downtown Seattle 4 days a week for that. He seems really interested in whatever the case is about. He says he will tell me in 2 1/2 weeks. For some reason he thinks I might want to let him know what I think (or how he should think)! December was supposed to be a busy travel month (Spokane, California, Dallas and back to California)but the jury duty thing is pushing that back. He had to go to a work meeting after a day in court. He walked in and everyone started applauding. He asked what that was about. They told him he had received the President's Award for the last quarter. He says, "Jen said something about that." They then asked who had texted me and Matt informed them that BT has sent something in the mail. They were a little irritated that BT would send something before they even got to let him know. He has done a such a good job there. There is usually a lot of flexibility which is nice.

Christmas...I went to a Relief Society meeting the other night and came home to a decorated Christmas tree. Thank you Madison, Ryan and Cade! It looks fabulous! 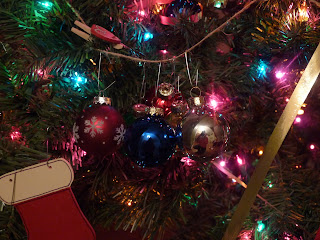 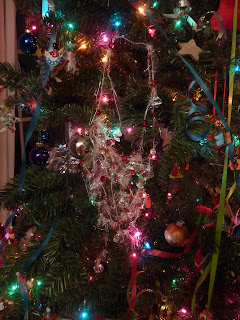 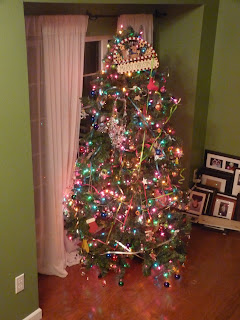 Duvall Christmas Tree Lighting...Last night our town turned on the lights on the community Christmas tree. They have booths and there is an area in the parking lot that is covered with hay. The kids dig through it and find candy and cheap little toys. Cade was playing with one of his toys last night when the little ball inside fell out. Ryan grabbed the toy on the floor just like it, took the ball out and put it in Cade's. "There you go, Cade." I told Ryan that what he did was so nice and showed what a big heart he had. Maddy looks over and says, "That was my toy!" Ryan says, "I never told you it was mine!"

Well it looks like your kids had to put so much stuff on your tree because they were trying to hide the fact you used a fake one!