The past few years for April Fools Day, I have 'tricked' the kids with food. I have done fake eggs (marshmallow creme), fake grilled cheese sandwiches (toasted pound cake with yellow frosting), fake french fries (toasted pound cake sliced) and fake juice (jello poured in glasses with straws). This year I made un-chicken pot pies. The last two nights I cut orange starbursts and shaped them into cubed carrots. For peas, I rolled pieces of green taffy. I was going to use bananas as potatoes but Matt and Maddy took the last two as snacks. Today I made the pie tops and the vanilla pudding. I assembled everything while the kids were in school.
Matt wanted to see the kids reactions so we waited until he got home to eat. Each kid moaned as their dish was placed in front of them. I told them if they each ate one pea or carrot, they didn't have to eat any of the other vegetables. Maddy was practically in tears just thinking about having to eat a pea. My brave eater, Ryan, finally took a bite followed by Cade who tossed his pea in his mouth to get it over with. Even when Cade declared that the 'peas' weren't so bad, Maddy wouldn't try it. Ryan couldn't hold it in anymore and let Maddy in on the joke. At that point, she didn't know if I was fooling her or her brother was. She finally stuck her tongue out and licked the tiniest spot on her spoon. April fools!
Now to get them to eat their real dinner! 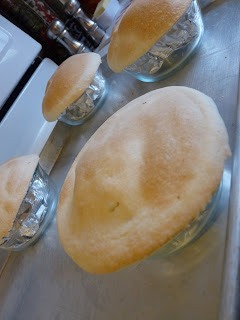 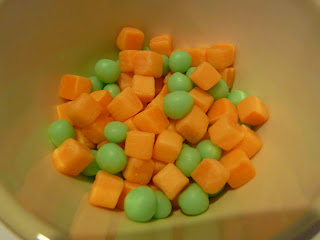 Here are the Starburst carrots and taffy peas.
Posted by jen at 5:55 PM

That is awesome...you did a good job!!I will have to try that one night

That's awesome! You are quite the prankster!!!

creative gal. I think I'd like some peas n' carrots please.